Gohar Dashti: Inside Out, sample personale

Vanillaedizioni shows the volume dedicated to the young Iranian photographer Gohar Dashti. The output of the publication shall be made on the occasion of the solo exhibition at the gallery of Dashti the Image Workshops in Milan (24 October 2013 – 24 January 2014).

INSIDE OUT, the title of the exhibition curated by Silvia Cirelli, proposes a course more cultural and artistic, which make up the contradictions of a contemporary conditioned continuously by the specter of social conflicts, political, public (l’outside), who invariably resonances on the private lives of Iranians, on their intimate sphere (l'inside). The art of Gohar Dashti surprising sophistication for a sharp, showing torment, but with subtle metaphors that only crossing the barrier of the apparent objectivity may include. Nothing is explicit, on the contrary, the truth is revealed to be a puzzle of hidden elements, who discover suggestions hitherto unacknowledged.

Milan will be visible in the exposure of, in esclusiva italiana, the most famous series of this artist, in a selection that contains the hallmarks, confirming the uniqueness lexical. Today’s Life and War, the 2008, from the title denounces the plight of living in daily contact with the war. The lead couple is in fact forced into a domestic dimension where there is always the shadow of violence: in one shot the two young dine peacefully, while behind comes a fearsome carrarmato, in another are obliged to spread their clothes on the barbed wire, in still another, fall asleep surrounded by a disturbing military team. Despite the constant threat of danger, there has never resignation on their faces, but rather firmly, determination to resist. This same rigor is also perceptible in the series Slow Decay, in which, however, adds a severity which suggests intense agony. The stillness of the scene gives private stories, intimate pains suspended between space and time, where the gaze of the characters announces secrets perhaps too bitter because they are declared. The severity is then abandoned in the recent series Volcano, the 2012, in which the artist depicts a sort of theater of the absurd, with characters that laugh and enjoyed a strange creature that wanders between the spaces. Although the initial feeling is that of a relaxed and joyful, the abnormal presence creates skepticism in the observer, who does not know whether to expect a disaster waiting to happen, or an innocent game. The exhibition ends finally with the last set of Gohar Dashti, Iran, Untitled, presented in Milan as the exclusive. The scenery changes again, moving on the outskirts of Tehran, in a nostalgic landscape and quiet. Here you consume small plots of life, that evoke the grace of traditional Japanese haiku, known to be able to translate into language, the intensity of an emotion. 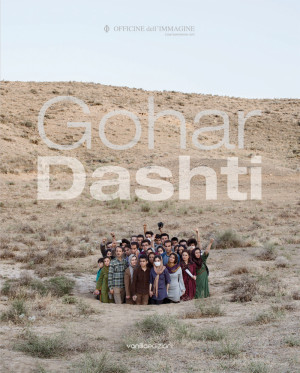 Presentation of the monograph GENERATION BEYOND by Andrea Marchesini