Nado Canuti was born in Bettolle di Siena (YES) in 1929. He currently lives and works in Milan.

Just 14 years he joined the anti-fascist movement by donating his entire arsenal, obtained after various thefts from the fascists and Nazis based in Tuscany, to the partisans settled on the hills of the Aretino Casentinese. This desire to fight dictatorial regimes arises after seeing the constant atrocities perpetuated to Italian citizens by the troops of Mussolini and Hitler. During these war years, the artist loses a hand due to an unexploded mine found by a friend of his in the schoolyard of Biettolle.

The artistic career of Nado Canuti, begins in 1959, when encouraged by his three friends and art historians Mino Maccari, Fortunato Bellonzi and Pier Carlo Santini, he made his debut as a self-taught painter by presenting his first works at the Municipal Library of Piombino. In the 1960s he definitively abandoned his job at Italsider in Piombino to move to Milan, decisive step for his career, in fact, it is in the Lombard capital that the artist receives the first consents at both a market and critical level.

In these years Canuti began to devote himself purely to sculpture. His early works are characterized by a macabre aspect and develop themes related to the pain of war. the Appearances, Metamorphosis and Depositions show various versions of this pain felt by the artist. In 1971, with the birth of his son Massimo, Canuti's art changes and embraces the theme of dreams and fable. His sculptures become colorful and "movable". In fact Canuti wants to create a sculpture that moves and that can be used by people to play and tell stories. This is his thought, Canuti, describes it in a text of 1993 titled Changing Form. Some movable works were on display at the Palazzo Reale in Milan accompanied by a text by Elena Pontiggia, which describes them as "portable theaters", in fact the figures represented, through a magnet attached to the back they are movable by the viewer.

From the early years 2000 conceives the series of pendants, ceiling sculptures that recall the mobiles by Calder. These mobile works consist of a square structure supported by some human figures accompanied by birds, symbols of hope.

In addition to being an excellent sculptor, Canuti also creates collages and very particular jewels that recall some figures of his works.

There are numerous exhibitions in which the artist has participated, including the IX and X Quadrennial of Art in Rome with a personal room, from 1959 to date it has held over 70 personal e 150 collective exhibitions in Italy, Germany, France, Swiss, Austria, Northern Europe, Arab countries, United States, Latin American countries, represented by the Gagosian gallery, Japan, Kenya. Significant, in 2001 the great exhibition at Palazzo Reale in Milan e, in 2002, the one at the Tadini Museum in Lovere. His works appear in Italian and foreign museums, in numerous public and private collections and in churches and sanctuaries. He has created monumental works of great artistic and cultural significance in Italy and abroad. 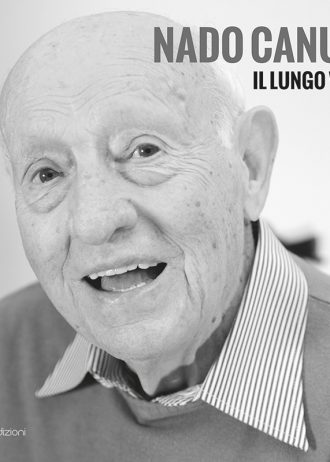